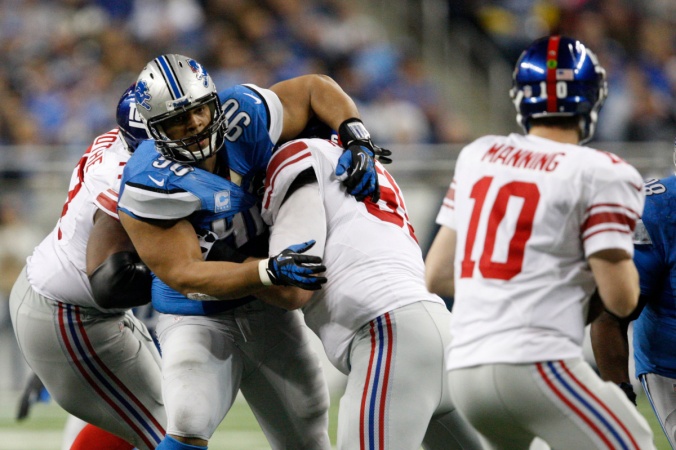 Watching the Giants game last night, one thing was clear. This was not the type of football that defined the Giants. There was no power in the trenches, especially on offense. Nothing pronounced that more clearly than when they called fade routes on 3 out of 4 plays at the goal line rather than trust their running backs.

But I wanted to examine that theory beyond just some well-known examples and the eye test. So I took the last 3 seasons’ worth of data in pass blocking and run blocking for each team, and compared that to their corresponding win percentages. For pass blocking, I used Football Outsiders’ adjusted sack rate, which looks at sacks given up in terms of volume of pass attempts and situation. For run blocking I used adjusted line yards, which separates the yardage generated by the running back from the yardage opened up by the offensive line. And the results were, well, surprising. 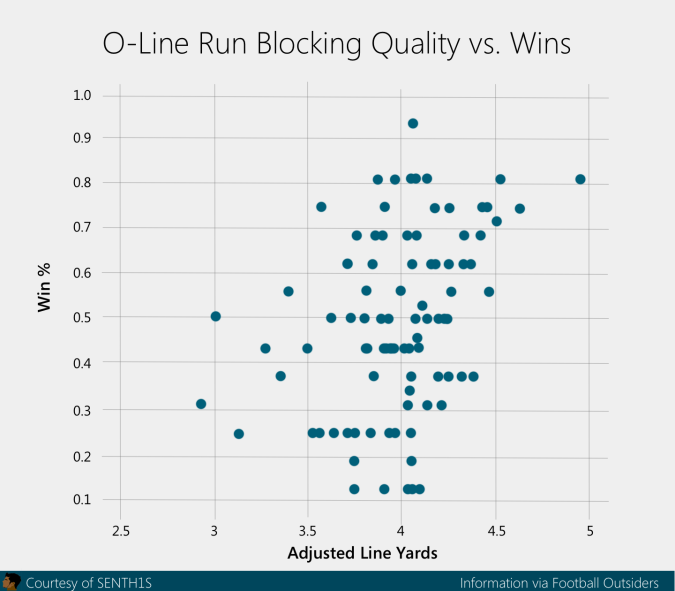 The first thing that stands out in run blocking is that there’s no discernible pattern. The data points are scattered all over the place. And indeed, the measured correlation coefficient is 0.3466. The closer a correlation coefficient is to 0, the less the two statistics are correlated. We want to be near -1 or +1. Obviously, some teams may just be bad at run blocking but still have excellent running backs that make something out of nothing. The running game has also been deemphasized in recent years, so run blocking holds less importance to overall success, at least when compared to pass blocking. It’s hard to process but can be explained.

Unfortunately, pass blocking doesn’t paint any clearer a picture. The correlation coefficient here is -0.2018, which is even worse. This could be due to some teams having really good quarterbacks who are adept at avoiding pressure or playing under duress. On the flip side, it’s entirely plausible that some teams that have devoted a lot of resources to building a good offensive line are just not stocked at the skill positions. However, with the passing game being so critical in the modern NFL, it’s just hard to figure out how teams that are so bad at pass blocking can win a lot of games.

This is a classic instance where the eye test disagrees with the numbers. It’s also useful to note that correlation does not necessarily equal causation. While it’s interesting that the correlation between offensive line performance and winning is so low, this probably doesn’t mean that you should disregard having good line play. The best conclusion to draw is probably that you should still err on the side of having a good offensive line, just not at the expense of other positions.

The Dallas Cowboys are a great example of this- 3 straight years of .500 football while building one of the strongest young offensive lines in the league. Too bad that their defense is wretched, and that they have depth issues on offense as well. It goes to show how many factors play into NFL success. You can’t win with just 1 or 2 position groups, the same way you can’t just predict anything with just 1 or 2 statistics.