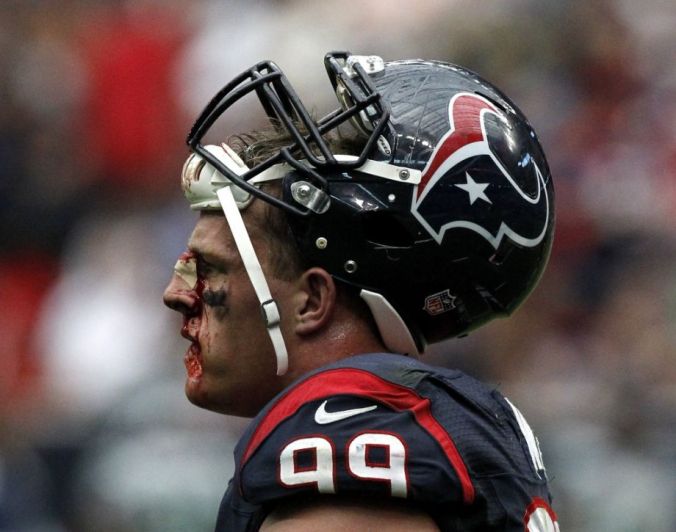 Update: This article was originally written for the Houston Chron before the start of the NFL season. Watt plays offense too now and has scored more touchdowns than LeSean McCoy, Andre Johnson, etc. Please JJ don’t hurt em.

The NFL is the American, everyman gladiator sport. Especially in football, we like to hold our athletes to idealized blue-collar demigod versions of themselves. We gladly shine the pedestals for these upholders of the quintessential American virtues – grit, endurance, and civic virtue.

In today’s league, there’s only one player so universally respected and lauded who checks every box on our list of stratospheric expectations: J.J. Watt, #90, defensive end, Houston Texans.

The everlasting image of him is his bloodied face, a timeless classic, staring down the Seahawks offense, so singularly determined to plow through every Seattle player on the field if he needed in order to gut out a victory. Grit? Check. Clean? He’s about as perfect off the field as they come. Toughness? The man played with a face that looked as though he’d slain several actual sea hawks.

Or what about the moment in the Pro Bowl, a glorified touch-football exhibition, when he sustained a deep cut to his hand, then directly warned all of America not to question how hard he plays. You can’t say we don’t play hard. Hey commish, I’m playing hard.

But all of that image would be for naught if he weren’t an actual force of nature during the game itself. His final stat line in that Seattle game was eight total tackles, a half sack, and two tackles for losses. J.J. Watt’s been the best defensive player in the league for two years now, an unstoppable beast on the defensive line with production on the level of all time greats. He’s the closest that we’ve come recently to having a defensive player win the MVP award.

Watt is the face of the Houston Texans. Everything revolves around him, doubly so as the team tries to rebuild from a catastrophic season. The coaching staff, the players, they’re all changing and in flux. But Watt is still the same. As they prepare to open the new season on Sunday, the team needs their MVP to set the tone — not just for the game, but for the entire season. And he undoubtedly will.

J.J. Watt is coming for you again, NFL. Did you hear he’s now got a running mate named Jadeveon Clowney? I heard he could be even more talented than Watt. What about the Texans’ new coach, the guy from Penn State? Isn’t Andre Johnson still around? The Texans are coming for you.

We don’t love Watt simply because he’s a great football player. We love him because he’s so ordinarily extraordinary. He is the archetypal American athlete. He is the best non-quarterback player in the league. He is the Houston Texans. He is J.J. Watt.